How To Mirror Android Phone Screen To Windows Computer

In this technological world, there are so many new things that have been introduced to all of us. As we all know, Android is one of the most popular mobile operating system among all the other, which comes with a plenty of useful features and facilities included in it. In this article, I'm going to explain you how to mirror your Android device screen with windows computer. 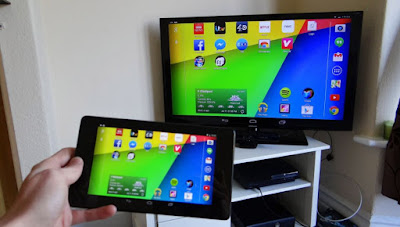 What Is Screen Mirroring?

Screen mirroring is a process where we share a screen of a particular device to another device. For example sharing your Android smartphone screen to another laptop. So in that case, we will be able to manage or operate the Android device directly from the laptop.

When you have the ability of screen mirroring your Android with your windows PC, you will not have to check out your phone to see what notifications you get. All of that can be directly done from the PC itself. This will also be helpful if the touch option is not working in your Android and so you can operate the system using your PC. This way there are so many things that can be done using the screen mirroring.

To get the screen mirroring process you will have to have the USB debugging turned on from the Android developer option. So let’s see how to enable the developer options.

In your Android smartphone you have to go to the Android ‘Settings’ > ‘System’ > ‘About Phone’. 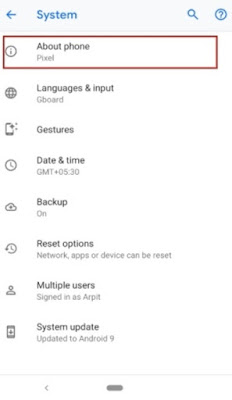 Next you have to scroll down and tap on the ‘Build Number’ five times.

Then go back to system settings.

Their you will have the ‘Developer Option'.

Now to enable the USB debugging on your Android device. 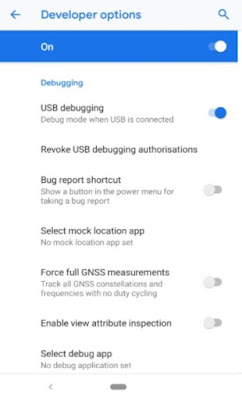 Go to the Android settings and select the option ‘System’ and then ‘Developer Options’.

There you have to scroll down and toggle on the USB debugging.

You can also tick on the ‘Always Allow’ for the ‘Allow USB Debugging’ to popup. So that you doesn’t have to repeat the process. 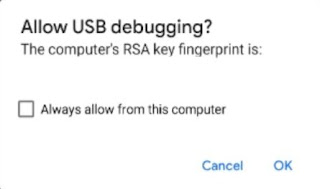 Always remember that Android screen mirroring need a strong internet connection if you are going to use the wireless option. You can also use the USB cable to view the phone screen from the PC.
Let's see a few simple ways to mirror your phone screen with PC through Android application using easy steps.

How To Mirror Android Screen

You have to get the app named Screen stream mirroring directly from Google playstore to your Android smartphone or tablet.

Let's move on to know, how to mirror Android phone screen with another device to get remote access.
Firstly start the app and it will ask your permission to capture everything displayed on your Android screen. 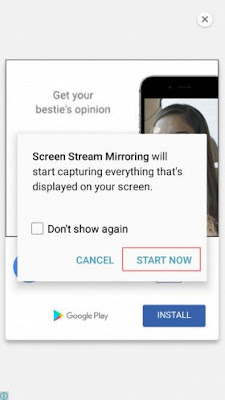 Next, a screen will appear as shown in the image below. Here you will need to swipe the phone screen left to right side. Now select the option called 'Preferences' as shown in image below. 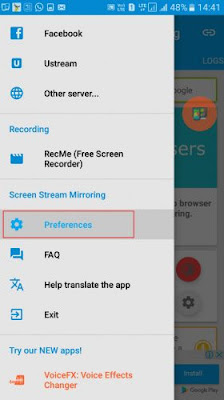 Now you will get a screen like this shown below and here you can setup mirroring options as per your requirement such as video performance, audio performance, etc.. 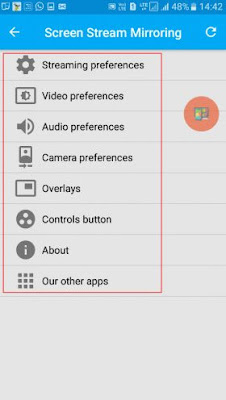 Once you finish the mirroring setup, again swipe you phone screen left to right side and select the option called 'Web Browser' as shown below. 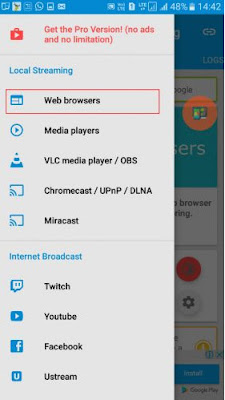 Now you can start mirroring your Android phone screen to computer and once you start the mirroring enter the web address in any browser from your computer as shown in the application. 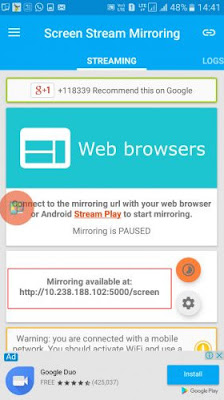 That's it. Now you will be able to see your Android phone screen in your computer. This 'Screen Stream Mirroring' application is one of the most popular screen mirroring application available free at Google playstore. You can download this application to your Android smart phone by Clicking here.

This is one of the simple and effective app that can be used for the purpose of screen mirroring. Using this app you will be able to manage the screen or do any works in your Android smartphone from the windows PC.

You can use the free version to simply drag and drop the screen. 'Vysor' works fast and also the latest version is super easy to setup. It also allows the users to click, play and share screenshots and recordings directly.

So now let us see how to mirror the Android screen to a windows PC through USB using 'Vysor' app. 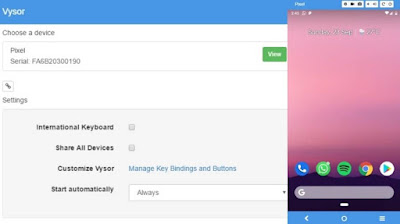 You have to get the app named 'Vysor' mirroring software to your windows PC.

Then connect your Android device to your PC using a USB cable.

Next allow USB Debugging prompt on your Android.

Now you have to open the Vysor Installer File in your PC.

Then the software will prompt a notification saying 'Vysor Has Detected A Device'.
You have to tap on the 'View' to start the mirroring process.

That’s it, now it will cast the Android device on your windows PC screen.

You also have a paid membership over the subscription. There are so many features available and it will take a little time for you to set them up. You also have a best game keyboard feature.

Now let us see how to use this app to mirror the Android screen to your PC without the internet connection.

First you have to get the app 'ApowerMirror' to both your windows PC and Android smartphone.

Then move on to the developer option and enable the USB debugging.

Next connect the Android to the PC using a USB cable. (Allow USB debugging prompt on your Android). 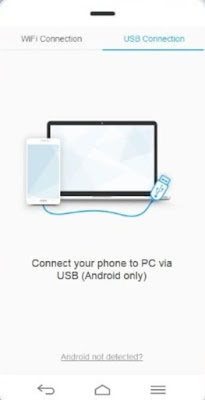 Now you have to open the app and press on the 'Start Now' and provide the permission to capture the screen. 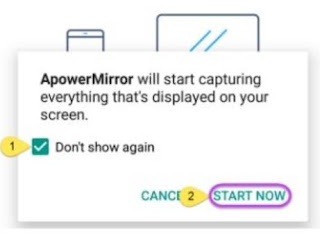 That’s it, this is a very simple process. Now let us also not forget to check on how to mirror Android screen wirelessly. 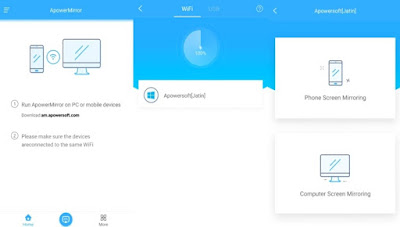 For that you have to first remove USB cable from the PC.

Then run the mirror app on your Android device.

Next you have to tap on the ‘M’ button which is available on the bottom end of the app.

Now make sure your PC version is up and running. Then you have to select your Computer name from the list provided.

Here choose the ‘Phone Screen Mirroring’. You can go to the option if you want to mirror the PC screen to your Android device.

That’s it, now you will have the mirroring process. Note that you have to first use the USB cable method before the wireless one, because only then functions will work accurately, or else you will only have the window on your PC without functionality.

'Airdroid' is one of the best apps liked by so many people, as it comes with a lot of features including the ability to synchronize between Android and a PC. 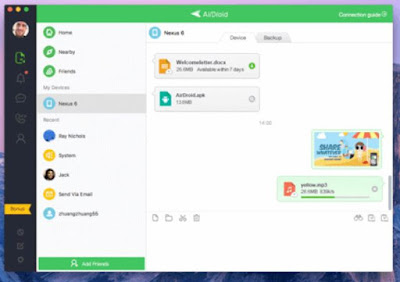 Using this Airdroid app, the users will be able to read messages, look at the notifications and even check missed calls and so on. You can use the free version with limited access and also subscribe for all the pro version. It allows you to take screenshots and record the screen for free.

You have to get the app ‘AirDroid’ to both your windows PC and Android device.

Then open up the windows app and create an 'AirDroid' account.

Next you have to add your account by signing in the 'AirDroid' app version.

Simple as that, now you will be able to access your Android directly from your PC. You can check on your messages, files and so on. You will have a floating bar on your PC screen which will show all the notifications you get.

If you want to receive desktop notification, go to Android Settings> Apps And Notifications > Special App Access> Notification Access > Then Toggle On The AirDroid.

If you want to stream your Android on PC, 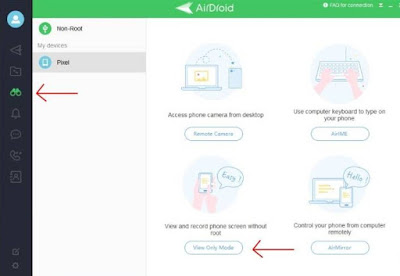 You have to open the app AirDorid on your PC and tap on the ‘Air Mirror’ tab.

Then select the ‘View Only’ mode.

Next go to the Android device and select the option ‘Start Now’ from the popup message.

That is all, the Android will start streaming on your PC.

So these applications let you to mirror and broadcast your phone screen as well as audio in real time in your PC. You can mirror anything from your phone to computer such as YouTube videos, games, etc by using this most powerful screen mirroring.